Honours Given to Equestrian Stars

Honours Given to Equestrian Stars

The very heart of equestrian sport has been celebrated tonight at the ESNZ Hall of Fame Awards.

Held in conjunction with the combined discipline’s AGMs, the awards, which had twice been postponed due to COVID, were held before a sell-out 230-strong crowd at the James Cook Hotel in Wellington.

The annual awards are designed to highlight the riders, horses and volunteers who make such outstanding contributions to both the excellence and growth of equestrian sport.

Rider of the Year went to Taupo teen Annabel Francis, who is now in Ireland. She had a number of very impressive podium finishes at top level during the New Zealand season and while still young, had headed home fields boasting many more years of experience. With Carado GHP and La Quinara she notched three wins and three seconds in the POLi Payments FEI New Zealand World Cup Series, before taking the final aboard Carado GHP. Debbie Francis accepts the Rider of the Year Award on behalf of her daughter Annabel Francis. Photo: Lisa Preston Photography

The Team of the Year award went to jumpers Bruce Goodin, Richard Gardner, Daniel Meech and Tom Tarver who bagged back-to-back wins at one of the highest levels when they won the CSIO5* Longines FEI Nations Cup class in Abu Dhabi. 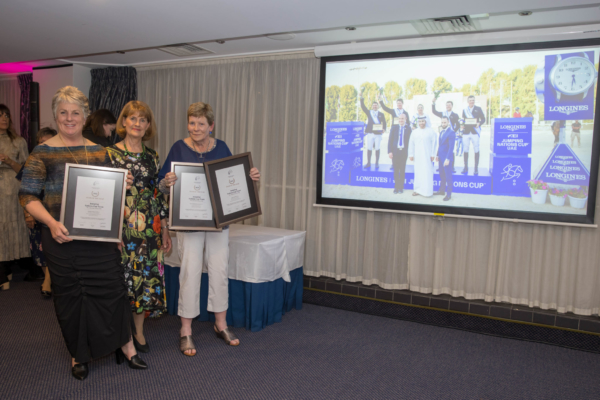 The Horse of the Year award was won by Kiwi-bred dressage star Windermere J’obei W who is owned by Rodney and Anne Parkes and its rider Melissa Galloway. From 19 starts at Grand Prix level in New Zealand, the horse has only once been beaten. The gelding, the 2020 Grand Prix National Champion and Grand Prix Horse of the Year 2020, is known for his incredible work ethic, generosity and true natural talent. Melissa Galloway’s horse Windermere J’obei W was the recipient of the Horse of the Year Award for 2021. Photo: Lisa Preston Photography

There were three inductions into the Hall of Fame made by ESNZ president Sue Hobson. Marcia Bayley has contributed decades to equestrian as an official, competitor, supporter and mentor to many. She is considered one of the true pioneers of her discipline, forging a pathway for many others to follow.

A top competitor, she was the winner of the first-ever Grand Prix (dressage) test in New Zealand, going on to success in Australia, helping the Kiwi team to victory in the first official trans-Tasman test and making the podium for the Grand Prix in the Australian Champs. She has won the Burkner Medal at national championships six times – four of those on the trot. It is a record that has only been surpassed once.

She qualified for the inaugural World Equestrian Games in Stockholm in 1990 but due to the prohibitive cost of transporting horses to Europe, was unable to attend.

The second inductees to the Hall of Fame were the victorious New Zealand endurance team who won gold at the 1998 World Equestrian Games. Comprising Alan McCaughan aboard Tonka, Jenny Hearn with Simba, John Stevenson on Taralea Raja and Kevin James aboard Glendaar Sarita, the Kiwis were considered outsiders but in the end were the only team to complete with all four members. Alan was the oldest rider in the field and the first Kiwi home in 22nd spot.

The final inductee was Butch Thomas, who over the years has made an outstanding contribution to the discipline of jumping. While California based these days, he is very much a Kiwi at heart and continues to coach a number of New Zealand riders across the levels.

Butch won a number of big competitions onshore before heading overseas in 1972 to set up a successful training and coaching business in the United States. Twice this rider has won the Bromont Grand Prix in Montreal, alongside the Lake Placid Grand Prix in New York and is a five-time winner of the Grand Prix of the Cow Palace in San Francisco.

In 1985 they represented New Zealand at the FEI World Cup jumping final in Germany. He has also been awarded the USHJA Lifetime Achievement Award in 2015.

ESNZ chief executive Julian Bowden presented a number of other discipline awards, alongside the ESNZ Long Service Award which this year went to dressage stalwart Wendy Hamerton who has been involved for nearly 50 years.

Julian said the awards evening had been a wonderful celebration of equestrian. “There are so many great people involved in our sport in all sorts of capacities – from riders to sponsors, supporters to volunteers, officials and so many more. It is a real coming together of a wider equestrian family that makes it so special.”

Rider of the Year: Annabel Francis

Inductions to the Hall of Fame: